skip to main | skip to sidebar

War is a Force that Gives us Meaning with Chris Hedges

We see the country slipping to a Fabian Fascism ! Wake Up!!!
Posted by Shuff stuff at 12:35 AM No comments:

Well, it has been a While! I have watched the Political and social events with great interest.. 091109 has passed with reverence except for the conspiracy folks. 091209 had depending who you believe 1.7 million to 3.5 mill. again who you believe ! I am watching a United States become Divided by who claimed to be a Uniter of people?His place of Birth in question , He can put that to rest! The Speaker of the House crying about the course that they created trough neglect and thoughtlessness to our people. I see a Fabian Socialistic Fascism growing within our own Government and it is shocking! Kensien Economics flowing like water which history proves failed! I have stated that I do not want to see this many times, I disagreed with many leaders both Dems and Repubs ,as other Americans have found it doesn't matter! I hear apologist explain it away by saying He's inept like Carter, I don't believe that!
The level of corruption is unsurpassed in local, State and Federal Government levels,They look at the people as surfs ! They are stabbing our allies around the world in the back ,while they cozy up to every puppet regime in the world mostly Marxist! Agencies public and private undermining our Tax Code or other Laws ACORN and SEIU..Also beating Citizens remenicient of Germany after the National Socilist German Workers Party took control in the 30's and their sympathisers did here also, how short our memories. It looks as if our dear leader will have difficulty getting his Civilian Security Force IE purple shirts in effect from their own stupidity..
He has shown hatred for people of lighter complexion than himself,Police and the Military, so his ultimate powergrab will be put off until he shores up support through SCREWING our allies! The next to be Screwed are the American People , Nancy we do not want your tears grab your ovaries and be an American and stand. What you fear is what you caused and America is now Awake blood of Patriots of all ages and colors will be spilled because of Liberalism , Which is a mental Disorder!!!!!1
Posted by Shuff stuff at 4:50 PM No comments:

Labels: Wake Up Liberals and RINO's

I am amazed at the level of lunacy in our country, from political leaders to the people! Marx was wrong Religion is not the opiate of the masses T.V is. We now have a major portion of our society who have cashed out, either sick of the silliness or a part of it. There was hope at saving this great land, I see it differently now due to the useful idiots and Alinskiites.
Ayn Rand while Atlas Shrugged was great fiction has come to pass it is only a matter of time !!!
Nuff Said,I have said my peace and will forget it all now !
Posted by Shuff stuff at 3:09 PM No comments: 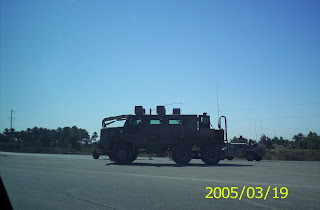 Well I'm back, I notice I have no following! While some may think I took this Picture off Transformers,the truth is it is a demining vehicle in use in Iraq. Since I have no followers it is liberating, so I know I can rant freely. As a rule I still believe in the Idea and implementation of America! The issues we face are arduous in the foreseeable future,and I thought the people would follow along with a socialist President without question. What I see now is the longer the stimulus package sits the more people see it is a stinker. The primary architect of the depression era President had after the fact stated that the spending was what kept the economy from recovery, until rescued by a World War economy that brought with it innovation the likes of which have never been matched. Now we have a Leader that wants to spend more into the trillions of Yankee dollars,by saying Roosevelt didn't spend enough. Not to mention He wants to take over IE;Nationalize our Banking, Auto, and heath care Industries,
One thing is clear to me in 2 weeks he has divided our nation right down the middle, the koolaid drinkers are even justifying Tax Cheats. When I got back from serving My Country in a war zone the tax man didn't give me a break and no body tried to say I didn't know. I had to pay it then ,but being a regular guy I had to make payments. Not just that but I had to have a surgery to correct a surgery I had in the Baghdad C.A.S.H.on Nov. 1. I had no insurance I thought the DBA ( defense base act) would cover it, no it was My dime 26,000 $ worth. only covers it in a war zone? Did I complain ? NO! The reason it is my responsibility not My neighbors.Could I have used the money you better believe it. I went to work in Detroit to work for the Government again all of a sudden gas prices sored to 4.89$ a gallon My house is in London Oh.I had to rent a place in Dearborn while there and it all came together in a perfect storm that if I kept that job I would subject My family to bankruptcy! There was an easy answer get another job that is what I did! That job fell though My own fault no one else's. So in closing the adversity taught me many lessons and for that I am thankful , The important things in this order are God, Family and My small cadre of friends. Those who know me may never have known that, I must put that out to let the world see if i believe something I can be real about it! See you next time....
Posted by Shuff stuff at 8:01 PM No comments:

Today my wife found a blog from a friend of hers ,she suggested I start one I will either like it or not, we'll see. I guess I'll kick it off with a brief thought: I have observed people for 23 years and got paid for it the U.S. Government paid me "no substantial money" to do it. I have enjoyed travel courtesy of the same. I realize that people" all over this big blue marble floating apparently aimlessly through our galaxy", are more alike than different . I only see the difference of Governments they come and go even in my brief time here.
History is replete with the rise and fall of empire it seems there is a finite time they last. A pattern of the Rise-Decline-Fall! I see things happening , have been a part of them (magical moments in time). Every self appointed soothsayer predicting these things are always wrong excepting Biblical examples . I see some strange parallels of late though.
Those brief magical moments have been good and bad experiences where time feels elongated. I savor that instant and wring it for all the happiness, sorrow, and terror it has brought me. The complete miracle of the birth of my Son, the joys of life with my wife. The pain of injury , sorrow of death drawn out or instant.The loneliness of separation, and joy of reuniting with family and Country. I know some things, there is a reason and a method to my existence:"SERVICE", to my God, Family, and Country bring me meaning.There have been times all of those listed have failed me in some way; did I notice, yes! I did not get bitter or resentful. That is the heat that forges and tempers the balance of life, adversity.
We Americans are a positive lot ,I have seen it we have that Yankee ingenuity and the can do nothing will stop us attitude for the most part. I have been disturbed of late my countrymen exercising their constitutional rights to tear this country down. I have been there and done that to protect them, to be able to do that with all my support to that right even when I have disagreed without being disagreeable.
I do worry for this nation not because of finance, even though I believe we will have a major issue. Caused by our unrestrained spending trying to stop our inevitable depression. It is the lack of respect and courtesy for other Americans rights Life,Liberty and pursuit of happiness.It started with our disdain for every leader since the 60's. We have lost the ability to critical thought schools from k - college teach more useless feel good classes and the bell curve is totally lopsided. Professors more worried about socialist agendas that have failed every where they have been tried.
People so full of distrust that they believe 9/11 was a Government hit. Government so full of distrust of it's people it wants to disarm them. It has become a self licking ice cream cone. I remember in the 80's it was exciting change had occurred I went to a very diverse school. During hunting season even in the burbs of Columbus Ohio I would drive to school following the laws of weapons transport and storage.The deputy assigned to our school would make sure it was unloaded and give you the warning not to get in your car till going home time. Now its quite different we have mystified weapons beyond the tool use, by the media and politics and are reaping the rewards of kids wanting to do purely evil things to each other.We have cracked down so much on our kids they can't get into a stress relieving dust up with an instigator with bare hands so it builds up.Most of my High school friends started in a fistfight after school win or lose.
In closing I just wanted to sound the alarm of my sons development is being retarded by the people who claim they "know" best. I just want to know where is the adversity ? It is vital to teach life not being fair, corporal punishment for incorrect action instead of life ruining criminal paperwork, and the natural development of a man instead of femenized wimps. I have seen an amount of men not femenized mostly in the military, that is the same world wide.
See you next post ,maybe !
Posted by Shuff stuff at 7:59 AM 1 comment:

Shuff stuff
I have a vast array of experience in military and law enforcement! Which makes me realize how little I know and I cant be surprised by much anymore!